When, in the summer of 1974, I planned to drive through Western Europe with my daughter and into the Soviet Union with my son, I was very aware of my ignorance on what to expect.  The fact that I would be driving on the familiar, right side of the highway gave me hope that I could figure out the rest as we encountered challenges. This worked reasonably well through France, Italy and Germany, and now we were in Vienna, ready to start the final adventure: the Soviet Union.

After my son, Pat, arrived by train from Luxembourg, I took the trolley down to the Intourist office on the Ring to pick up our visas to the Soviet Union. When they said they had never heard of our reservations or us, I was dumfounded. I protested that I had been assured the visas would be here, and the officer promised to send a Telex inquiry to Moscow

Two days later, we finally got a reply from Moscow stating that they knew nothing of any reservations.  Intourist suggested we might go through an Austrian travel agency and arrange a shorter tour.  Plans would be approved in ten days and we could pick up the reservations in Bucharest, Romania.  This sounded like the best we could do, so we asked for five days to Odessa and Kiev which was all the time left before our August 18 flight home. As I look back, I can only shake my head at how naïve I was. I did not have a clue.

Suddenly Pat and I were left with ten unplanned days. Frustrated and disappointed, we decided that heading south through Yugoslavia was our best option. We could at least see life in some of the Soviet satellite countries.

In Bosnia, near Sarajevo

The entire ambiance changed as we left the highly engineered highways of Germany and Austria for narrow two-lane roads where we once followed a team of oxen pulling a load of hay.  Farmers plowing with oxen and wooden plows, and hay being cut with scythes seemed a step into the past.  As we neared Sarajevo, the two-lane road became so narrow that if we met someone, one of the cars had to have a wheel on the shoulder. 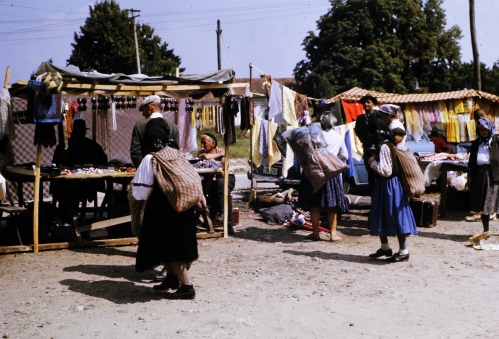 A roadside market along our way

That first afternoon in Sarajevo was pleasantly warm and we were having tea in a sidewalk café when we suddenly heard an odd cry or chant, and then heard it again from another direction.  Pat turned to me, “What is that?”

I thought a moment, and then said, “That must be the Muslim call to prayer.”  As we looked for the source of the sound,  we noticed the prayer towers above several mosques.  That was a magic moment, made more significant in retrospect because it was the first time I heard a chant that became part of my daily life three years later.